Way to kick- off the new year!

Poles’ first official day with the Chicago Bears was Tuesday. Edging out at least 13 other candidates, Poles’ 36, was an offensive tackle at Boston College. The Bears signed him as an undrafted free agent in 2008, however he didn’t make the roster.

Kwesi Adofo-Mensah 40, and The Minnesota Vikings have finalized the deal to make him their next general manager, per NFL Network’s . As reported by NFL Network’s Ian Rapoport.

Locking Adolfo-Mensah in with the Vikings’ franchise for the next for years at $12 million dollars. Serving as the vice president of football operations for the Browns for the past two years.

Adofo-Mensah an New Jersey native, has economics degrees from both Princeton, where he was a junior varsity basketball player, and Stanford. One thing is for sure, we here at SET are looking forward to seeing how these two shake things up! 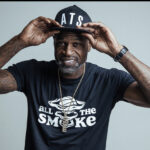