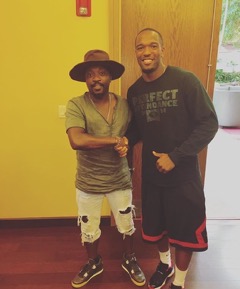 A few days ago a video of San Francisco 49er, Quinton Patton, singing his heart out in the locker room after their first win of the season surfaced on social media. But what was surprising was, “what” he was singing. No, it wasn’t a song from todays generational style of R&B music, nor was it Hip Hop artist Drake or Future (who is his favorite hip hop artist). It was a song that was released in 2008 called “Cool” when he was 18 years old by Grammy Award winning, singer song-writer and actor Anthony Hamilton.

Most would wonder why this is such a news worthy story to me. Its news worthy because rarely do we see vulnerability in athletes. Catching Quinton’s free spirited, organic vulnerability off guard in his own element was refreshing. “I didn’t even know that they were recording that,” Quinton exclaims excitedly when asked about the heartfelt impromptu performance. “I didn’t know that they were going to catch me singing the song like that. I always sing songs in the locker room, after the game and halftime. But I can’t sing though. I just turn the music up just loud enough. Its all about if I feel it and I think I can hit that note,” he says as he laughs.

He starts running through the songs that are his favorites of the singer from, Can’t let it go, Cool, and starts belting the words to, Coming where I’m from. Its refreshing and speaks to the appreciation of good music that still dons love, passion and relationships. “Its humbling,” says Anthony Hamilton when I got the two of them together to meet for the first time.

“Did Charlene finally come home,” a tickled Quinton playfully asks when Anthony walks up to meet him. Anthony warmly laughs as Quinton asks if that song was real. “Yea it is. The name is not Charlene, but it was a moment I was going through,” he stoically says. Quinton on the other hand with his fun loving character teases him saying, “Man you was crying in that booth! I could tell you felt so hurt by that song.” A smiling Anthony chucked and says, “yea I was going through a break up back then man.”

As the two sit and chop it up about life it comes to light that both Anthony and Quinton had no idea initially that either had reposted the video. In fact the day of the interview was when Quinton realized it. “I knew it was on a couple of the fan pages but when I saw it. I was like dannnng, he really seen it. I hope I hit that note right,” he laughs heartily. Anthony said he was flattered and honored upon finding out the appreciation Quinton has for his music. “It felt great. I was humbled that my music still touches people. Its cool, its cool,” as he gives un unintentional shameless plug for the song, “that a young cat is listening to my music.”

Quinton smiles and says, “Its just like anything else in my life. I just feel like I am a person who brightens up the room and to have a person like Anthony say that about me and about himself being humbled puts it on a whole different level,” he says. “You never know how it could have effected his life right then to see me doing that. It wasn’t intentional. I was doing it out of my character and just having fun. For him to say that, its big.”

As the interview starts to wind down the two began to talk about football. “I like football. I used to play football as a safety and tail back,” Anthony says. “I was pretty fast too.” Back and forth the two joke about their opposing positions on the field. “I’m either gonna be blocking for him or running from him,” laughs quinton who’s a starting receiver for the 49ers. “Yeah man and if you catch that ball I’m going to pop them legs,” Anthony says says jokingly.

The sight in front of me as I watched a R&B Icon and a successful young professional athlete vibe together over music was warming. Two total strangers, yet somewhat in the same spot light share an equally humbling experience all because one fans “fanism”of both music and sports collided. 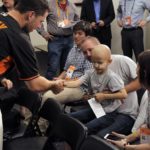 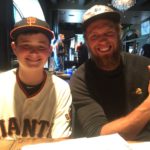